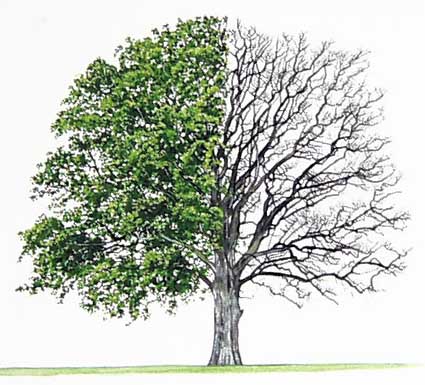 Thoughts about the three main similarities between humans and trees:

American Hardwood trees are like humans in three distinct and profound ways:

Let’s talk about items #2 and #3.  While humans can live longer than 80 years, trees can also.  However, past this peak life span,  trees and humans are both vulnerable to disease and injury, generally declining in health.

A symbiotic relationship exists between trees and humans.  Humans breathe in oxygen and exhale carbon dioxide, while trees breathe in carbon dioxide and exhale oxygen.  During a tree’s life span it has been absorbing carbon diligently and when it passes its peak and declines in health it begins to leach its stored carbon back into the atmosphere.  While it seems counterintuitive, proper sustainable management of the forest begins with the extraction of the trees closest to their peak life.  In harvesting those beautiful, healthy mature trees when they have basically stored all of the carbon they will store in life, you not only allow for sunlight to get to the forest floor, thereby encouraging fresh growth, but you capture the carbon in that tree forever, even as the tree is transformed into various wood products.  The only way the stored carbon in hardwood products will ever be released is through fire.

The forests of the United States have been well managed for more than a century through “selection cutting”, which means the extraction of the mature trees rather than clear cutting.  By taking only those trees closest to their peak life, new growth takes its place.  For every tree that is harvested in the United States, 1.9 trees take its place through natural regeneration.  As a result of this careful management of the forest resource, there is nearly twice as much hardwood growing in the United States now as compared to 50 years ago.

The third and most important similarity between humans and trees is that each tree, like each human, is unique and beautiful in its own way.  To assume a post-industrial revolution mindset in the design process, that all hardwood flooring, for example, needs look the same, is to invite heartache and disappointment.  Every tree, based on the soil in which it grew, the length of its growing season, and general environment will develop different colors, no matter how slight.  If a designer or architect revels in the unique nature of hardwoods instead of fighting this natural variation, they will be rewarded with a space or piece of furniture that will never be duplicated.

Those of us who are fortunate enough to be a part of the hardwood business can feel proud of the fact that with every tree harvested, rendered into boards, kiln dried and made into flooring, millwork, doors or furniture, we are actually making forests healthier and bringing beauty to the world.